Below is an editorial that I wrote for the April edition of “The Dove” – the quarterly publication of the Doukhobor Society of Saskatchewan. Posting here as I thought it may be of interest to a bit of a wider audience, and at the very end it teases a side-project linked to my Doukhobor heritage that I was able to get started while I was back in Saskatchewan at the start of the year. I’m excited (if perhaps a little daunted) at this new challenge given that it is outside my usual comfort zone of professional competencies, but it is something I have wanted to do for a number of years and – if I may borrow a quote from the editorial – if not now, when?

Also just to note for those who may be wondering, I’ve been back in Ottawa for just over a month now and am happily settling back into life here. Some great opportunities ahead with my work for the federal government, specifically around some new initiatives I am working to get off the ground on improving digital service delivery to Canadians. Much more to share on all of this the weeks and months to come, but in general I can say that life right now feels a little bit like this epic scene from that classic “The Blues Brothers”:

So more to come (as always), but without further ado, the editorial on “Spirit Wrestling in the 21st Century”:

The start of this year I found myself back home spending some time with family in Saskatchewan as I had the rare occasion of having a few months off before returning to my work with the federal government in Ottawa after finishing a one-year posting with the Organisation for Economic Co-operation and Development (OECD) in Paris. This time back home gave me the opportunity to re-connect with our Doukhobor community, and in February I had the great pleasure of being invited to present at the Doukhobor Cultural Society of Saskatchewan (DCSS) annual conference in Saskatoon.

The theme of this year’s DCSS conference was Doukhobors and their interaction with the wider community. To me, implicit in this topic are questions that speak to the core of who the Doukhobors are, what they have been in the past, and what they will be in the future. Almost three years ago, I wrote an article expressing some of my emerging thoughts at the time about the future of the Doukhobors in Canada. I picked up on many of those same themes in my presentation to the DCSS conference this year, including the famous “three questions” from the Jewish elder Hillel some two thousand years ago:

To my mind, the paradox of the Doukhobors is this: as much as we have at times in our history as a community – through either choice or circumstance – been isolated from the wider world, both our fate and our identity is equally bound to our interactions with others. One example which I shared was the famous (perhaps some may say infamous?) photograph of Doukhobor women pulling the plow to break the prairie soil when they first were settling what is now Saskatchewan. 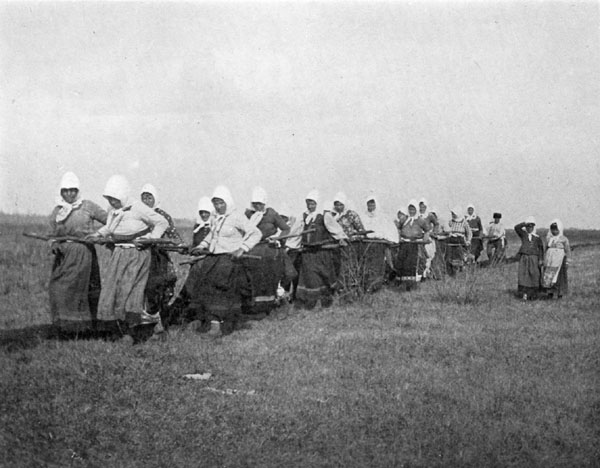 “Doukhobor Women Pulling a Plow” – from Library and Archives Canada

The reaction to this photo took many forms in the press and other writings of the day, with some denouncing what they saw as the barbaric treatment of Doukhobor women, while others championing them as feminist icons of their day. The truth of course was not nearly as black and white as any simple narrative would pretend, the reality being that they were just doing what they had to do to survive since most of the men were away earning wages to be able to buy the animals that would in years to come pull the plows. However the point remains: if we do not make the choice to own our narrative, others will shape it for us.

Our Doukhobor community has done much in the past century to engage with the wider world, which has largely taken three forms. The first is sharing our culture through community events like Saskatoon Folkfest and the ever popular Doukhobor bread-baking booth at the Saskatoon Exhibition. The second is engaging through song, with the many Doukhobor choirs over the years which have performed not just locally but also nationally and internationally. The third is the involvement of Doukhobors in the international peace movement, going back to serving as conscientious objectors during the first two world wars, to being part of the nuclear disarmament movement during the Cold War, to more recently being active members of organizations such as the Saskatoon Peace Coalition. Most recently, as the world has gone digital so too have the Doukhobors. In my younger years I was proud to have put together one of the very first Doukhobor websites – the Doukhobor Homepage (now since defunct) – way back in 1996. Since then many new initiatives have emerged to capture and share the Doukhobor story through the internet, including for example Jonathan Kalmakoff’s Doukhobor Genealogy Website and the recently created Doukhobor music archive.

So while we have come a long way from when we were part of an isolated community in the Russian steppe of the 19th century, the question of our identity and shaping our narrative into the future is more relevant now than ever. As we know, our community is shrinking in the traditional way that we think about it. Moreover, if we are being honest, much of our identity as we express it in the songs and hymns we recite are rooted in past struggles as opposed to creating vision for the future.

In my presentation at the DCSS conference I shared the story of my Harvard professor Ronald Heifetz, with whom I had a long discussion in class about the Doukhobors in the context of his course on “adaptive leadership”. His summation at the end of our discussion (which thankfully was recorded, as all of our discussions in that class were) always deeply resonated with me, which was as follows:

“The adaptation of the values and virtues and competence and wisdom embedded in these loyalties [to the Doukhobor community] as it applies to today’s problems, right now, may require preserving and conserving and holding constant a lot of that wisdom, but not all of it. But you don’t know which of it to value and which not. As you put your hands though it, you have to be able to approach it with an open mind to begin to figure out what adaptations are required to apply the best of my Spirit Wrestling tradition to the problems of people today. You probably do have, and your community probably does have, real contributions to make to lots of peoples in the world. But not by simply in a wholesale fashion, almost a mindless fashion, just applying the software you’ve got to this particular application. It would have to be reconfigured a little bit, wouldn’t it?”

So where do we go from here? What is Doukhoborism in 2016? Where will Doukhoborism be in 2036? These are hard questions for which we can spend endless time thinking and debating, but the example of our ancestors should tell us that the best way forward is to have a bias towards action, grounded in our best spiritual wisdom and understanding. In that spirit I would propose two concrete ideas to consider as to how we might see the Doukhobor community evolve, and indeed thrive, in the years to come while preserving the best of our collective past.

The first is that as Doukhoborism becomes part of the digital age, there is great opportunity to reconnect those whom have links to and interest in the Doukhobors both in philosophy and ancestry. We have seen just the tip of the iceberg in terms of what is possible in this regard through some of the examples I mentioned earlier, but the possibilities for connection that social media and live video/audio through the internet gives us means that our traditional spiritual practices can evolve in ways we couldn’t have imagined just a few years ago. The reality is many of our Prayer Homes in Saskatchewan have already closed their doors, and the ones that are still open are continuing to dwindle in numbers of active members. But why couldn’t we build a “virtual Prayer Home”? A space online to discuss, to pray, and to share community with those scattered across the globe who identify as Doukhobors. This is not only possible, but with the technology of today relatively easy and inexpensive to put in place. Other faith traditions have started experimenting in this way, for example a good friend recently shared with me her experiences interacting with the Abbey of the Arts which is a “virtual monastery” that connects people from around the world to deepen their spiritual reflections through shared activities. We can do the same.

Secondly, for the past few years I have been interested in putting together a project to capture our spiritual practices as Saskatchewan Doukhobors. This is an area of our Doukhobor tradition that has not been well documented, and the window is closing to be able to do so while we still have sufficient numbers left to participate in a traditional Molenya. I was able to take advantage of my time back home in Saskatchewan earlier this year to put this project into motion, and I am working with the Doukhobor societies in Saskatchewan as well as some local and national film and audio experts to put together what will be an exciting opportunity to professionally record a Saskatchewan Doukhobor prayer service. The vision of this project is to create both a documentary film about Doukhobor prayer services as they are practiced in Saskatchewan, as well as an in-person multi-media installation/exhibit that will let others be able to experience what it is like to be part of a prayer service. We will be holding the recording of the prayer service on Saturday, October 22nd at the Blaine Lake Prayer Home and will be encouraging as many Doukhobors as possible from across Saskatchewan to participate. Details on the special prayer service recording session as well as how you can contribute to fundraising efforts to support the project will be shared in the next edition of The Dove, so please check back for more info then.

Doukhoborism as we know it is going through a transition. With any change, while there is uncertainty, so too is there opportunity. Thus I end this article as I ended my message at the DCSS conference: with a call to action. Indeed, if not now, when?