“Did they get you to trade
Your heroes for ghosts?
Hot ashes for trees?
Hot air for a cool breeze?
Cold comfort for change?
Did you exchange
A walk on part in the war
For a lead role in a cage?”
-“Wish You Were Here” by Pink Floyd

Let’s start with the punchline: November 17th will be my last day as a public servant in the Government of Canada.

A few months ago I wrote about my journey over the past decade working on what these days we call “digital government”. It has been an amazing adventure, with the full range of triumphs and challenges that any good journey contains. Not the least of which has been the recent launch of the Canadian Digital Service (CDS) this summer.

For me personally, CDS represents the culmination of almost a decade’s worth of work in my professional career. In particular, the past 18 months since returning to Ottawa from my year at the OECD in Paris, creating CDS has been my all-consuming obsession, and through it I have had the incredible opportunity to build a new organization from the ground up. It’s an amazing team with an ambitious mandate to play a lead role in changing how government leverages technology to better serve the people who use government services. CDS is also equally about changing the culture of government, both by bringing in talent from outside for “tours of duty” in the public service, and by demonstrating a different way of working in government which embraces openness, agility, innovation, and a focus at the centre of everything we do on the real people impacted by our work.

All of this begs the question of course: why leave now? While CDS may have only just recently launched and most of the team is coming into this fresh (relatively-speaking), for me this has been a multi-year journey leading up to this point. My goal was always to get CDS off the ground and build the momentum we needed to sustain through the hard work ahead during the next few years of our mandate. On that count, I feel increasingly confident that we are there. We have secured funding for the next three years and established the organization; built an initial core team of two dozen passionate and talented people and are actively recruiting our next wave of recruits; we have built relationships across Canada and internationally and are starting partnerships with organizations like Code for Canada to enhance our capacity; and we have started our first project work with departments to begin making tangible improvements in how government delivers services in a digital world.

There is never an easy time to make a decision like this to leave. But at the same time, this was always going to be a natural inflection-point for me. When I joined the federal government in 2010 I did so with the intention of it being a relatively short tour of duty. More than seven years later, while I have been here much longer than I anticipated, I am grateful for having stayed this long and being able to see many parts of that vision of a modern, digitally-enabled government start coming to fruition. That said, there is much work to still to be done and many parts of that same vision which remain unfulfilled. For this type of large-scale transformation to be successful it needs people both inside and outside of the system passionate about change and working actively to make it a reality. As I have reflected in recent months on what my personal next steps should be, it has increasingly become clear to me that where I might be able to best add value right now is to be an informed voice from the outside where I can work on these issues from a different perspective.

So what’s next? To start, I’m going to take a little bit of time off. Though not really, because as anyone who knows me knows, I’m not very good at actually taking time off. At the end of November I’m going to head back home to Saskatchewan for an extended visit to both see family but also do some work on the documentary film and multimedia installation project about the Doukhobor community in Saskatchewan that I have been working on in my (non-existent) spare time these past 18 months. It deserves some focused attention from me, particularly as we move into the “creative” phase of storyboarding and editing which is something that you just can’t do a few hours at a time on evenings or weekends after coming home tired after yet another 12+ hour day at the office.

After that? We will see. While my intent is to stay actively involved working on issues around digital transformation in government, I’m keeping myself open to possibilities on what shape that will take. The New Year will bring new adventures, and I am conscious of how relatively rare it is in life to be able to make the choice to have a blank slate to work with – put another way, I am grateful for the opportunity to start 2018 with no idea how 2018 will end (terrifying as that might be at times, if I am being honest)!

Bottom line: stay tuned, and stay in touch. I will be on the usual social media places (Twitter, Facebook, LinkedIn, Instagram), and of course, keep an eye on this space (which I suspect may become a bit more active) – including signing-up for my mailing list to get blog updates directly to your inbox:

One last thing: Thank You. I didn’t want to turn this post into an Oscar-speech-gone-bad with an endless list of people to thank. But that is only because it is true. The list IS endless, and there are so many people to whom I am eternally grateful for the impact you have had not just on my career, but on my life, in ways big and small. The only way I can repay those contributions is to hopefully have just as big of an impact for all of you, even while we explore different paths forward on this journey together. As always, I remain optimistic that the best is yet to come. 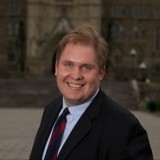 15 replies on “Starting a New Chapter”

Good luck my friend! I am sad to see you go. Not only because of a leader in digital innovation, but also because I will no longer have someone to mock or compliment openly at major events. That being said, you’ll find a way to shift into something amazing and that our paths will cross again one day! To future paths Big Ry!

Consistency is the playground of dull minds 😉
Ryan, you never cease to amaze and inspire! Godspeed towards greatness, which I have no doubt awaits with open arms wherever you shall venture.

Good luck with this new adventure Ryan! Swimming in a fish bowl is overrated anyway ✌🏾

Ryan you have been a superstar in Government. You have inspired many and will continue to do so, even if from afar. Good luck in your new adventures!

As Peter Drucker once said: the best way to predict the future is to create it. Off you go Ryan. Always a pleasure to watch you evolve.

Ryan, sad to see you leave, and happy for you. To be honest I am not surprised knowing the great visionary that you are and the unique 2% entrepreneurial mind set of yours. I am sure you will be excelling on whatever you will be doing, and will always be cheering for you for the side line.

Best if luck Ryan – it was a pleasure working with you while at Treasury Board Secretariat! You make your own luck so I predict a great future ahead for you! Enjoy your time with family and friends before you embark on your next chapter! All the Best! Kathleen Fraser

So proud of you Ryan and all you have accomplished. Would love to connect and hear more from you sometime. With Magnificent LOVE, Angelina

Ryan – Carpe diem my friend ! my new role brings me into Saskatoon regularly so look forward to catching up after the 17th!!

Ryan, we had a great run together. Stay in touch.

Always a high-five, man. All the best.

Oh, water buffalo… the public service will miss you, but we know you will continue on to fun, creative and meaningful things.

[…] has been exactly six weeks since I officially left the federal government and took the first steps towards whatever 2018 (and beyond) will bring. Truth be told, it feels […]

[…] that I’m embarking on some new ventures in my digital government journey. Late last year I made a big leap professionally and left the federal government after many years working on issues around using new digital […]